Located in the regional centre of Toowoomba, Queensland, Tjuringa House re-imagines the story of the original 1960s brick dwelling. The new design invokes the essence of the previous home in a modern and adaptable setting that resonates with a new family.

The home reflects Toowoomba’s nickname, ‘The Garden City’, sitting on a sprawling grassy block. However, where typical home styles range from humble workers cottages to stately Queenslanders, Tjuringa House stands out for its unique and imposing brick facade. According to architect Jesse Bennett, from Jesse Bennett Studio, the client’s brief was to capture the mid-century character and create an inspiring forever home that feels peaceful and safe, yet playful and creative.

The original concept was to retain the existing brick perimeter walls, redesign internal layouts and float a concrete sail over the top to allow natural light to flood the space. Unfortunately, the original walls were not structurally sound, so it was decided the house would be built from scratch, recycling as many materials as possible, and replicating the original two storey brick wall perimeter.

“The inspiration for brick selection was taken from the pre-existing 1960s house. We wished to re-create this honest character matching the colour and texture palette. To achieve this, we decided to use a 50/50 mix of Black and Tan and Copper Glow from the PGH Bricks & Pavers Smooth range,” said Bennett.

A popular choice with architects and designers, the smooth texture and sharp lines of the PGH Smooth range created a strong, clean aesthetic. With the palette inspired by the Australian environment, the combination of Black and Tan and Copper Glow colours helped to achieve tonal variation and depth of colour in the façade so it blended with the surroundings. This approach also provided the dwelling with warmth, character and a soft and approachable feel.

“The building plays with time,” commented Bennett. “We did not want to look as though it was from any distinguishable period or style of architecture. Instead the design explores cohesion and reinterpretation of the existing visual language, mimicking the aesthetic of the original dwelling with a combination of unique yet recognisable architecture elements.”

To help define the entry promenade and approach to the home, a series of brick arbors were designed as way-finding nodes for visitors to navigate. These lead to the main entry courtyard, which is framed by an imposing double archway wide enough to welcome up to 10 guests. According to Bennett, it also draws the eye outwards to the vast space beyond the frame and blurs the boundaries of architectural styles.

“When laying the bricks, we used many standard bonds, but re-interpreted in new ways. Soldier coursing was a recurring feature motif. It was a simple and effective method of providing strong linear horizontal bands with a nice rhythm. This coursing was also applied to borders to external floor terraces, which created bold outlines to floor areas. Brick was also applied to key areas internally to provide a continuous material finish from outside, and quality of warmth, character and colour palette,” continued Bennett.

A classic mortar mix was used, without any colouring or additives, as the grey compliments the adjacent concrete elements, especially the sweeping concrete sail. The concrete roof cap appears to float over the house suspended between five monumental relic-like columns and works in tandem with the brick to set the home low into the hillside and shield it from the notorious Toowoomba westerly winds.

While the house bunkers down into the hillside and utilises the brick structure as a place of refuge, housing many private and secret spaces on the western side, it opens out to the east to embrace the morning sun and leafy outlook.

Additional new concrete and glass forms pop out of the perimeter to take advantage of the expansive valley views and well-established garden acreage. “There is a definite exploration of scale and blurring of building classification. We have used enormous scaled columns to suspend the roof and combined these with tall and slender brick archways on the ground level,” stated Bennett.

Roof gardens were prioritised in the design, with abundant planter boxes and pots scattered around the home to help soften the hard edges and earthy tones of the brick facade. They are intended to become overgrown, creating intrigue and delight, a relic to be discovered and explored. 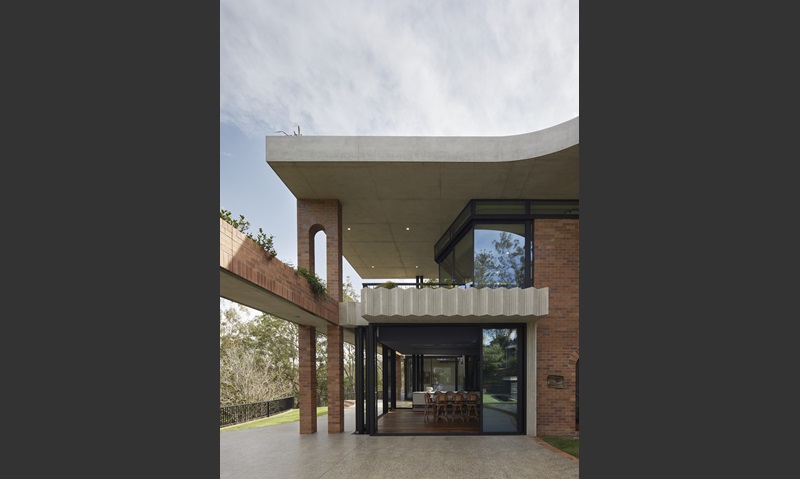 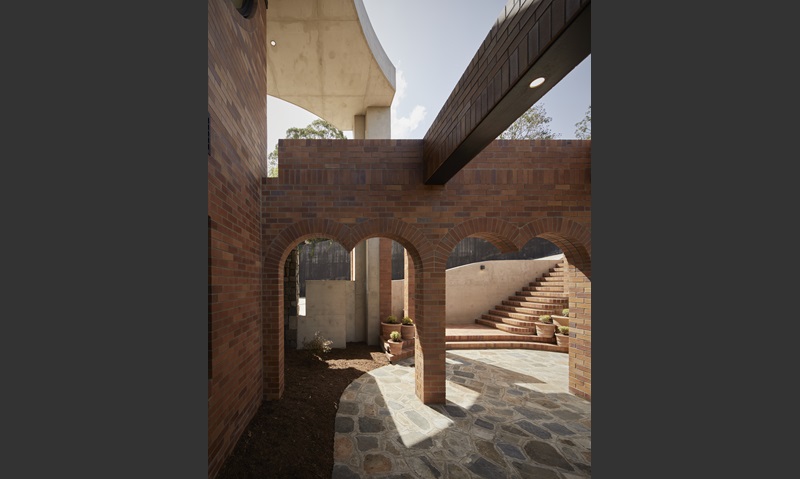 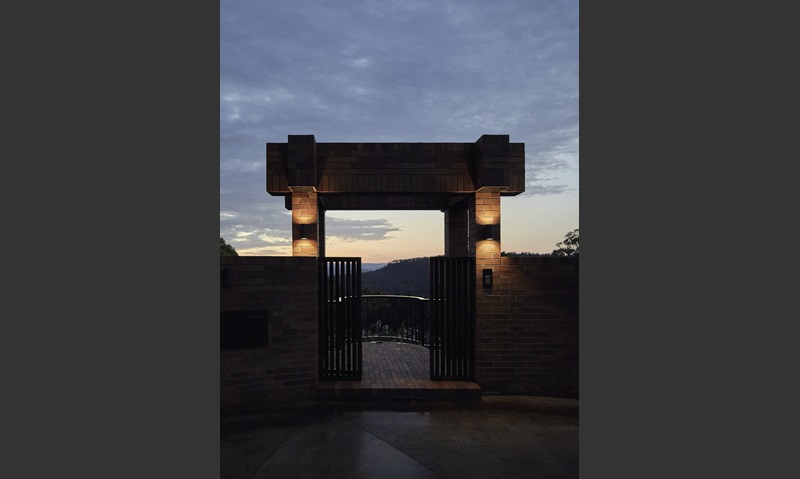 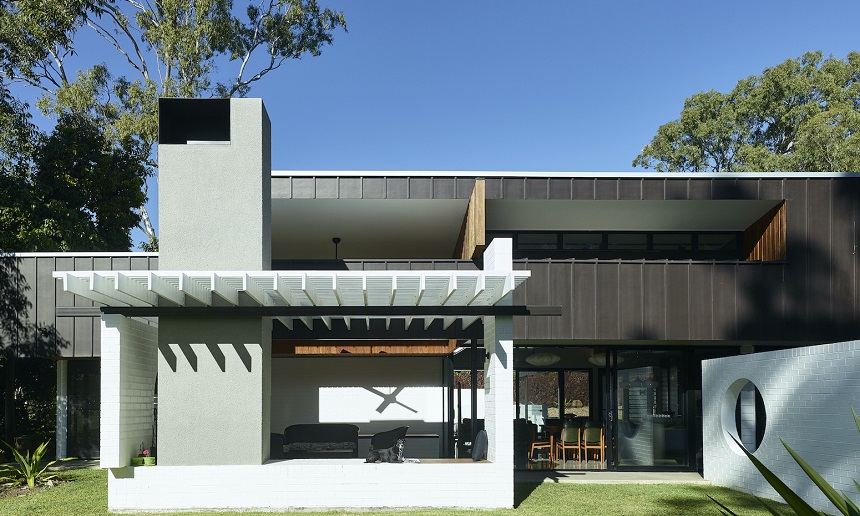 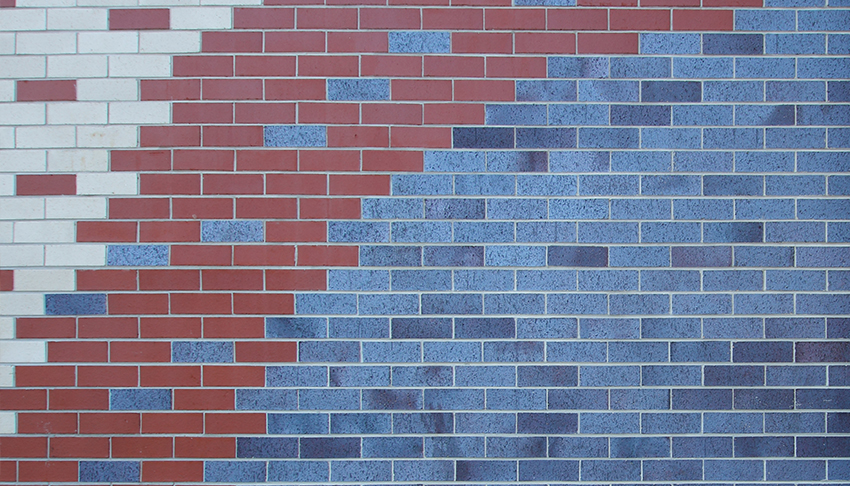